If it turns out that you have a brain aneurysm, you will be referred to the neurologist or neurosurgeon specializing in cerebral arteries. The doctor makes an assessment of the risk of the aneurysm hemorrhaging and weighs this against the treatment risk. If treatment is being considered, an aneurysm examination is planned in order to identify the aneurysm properly by means of a vascular examination (angiography).
On the basis of this examination, the attending physician will consider a treatment plan. This is done in consultation with neurologists and radiologists specialized in brain vessels. If necessary, they consult and cooperate with national and international colleagues. We will discuss the advice about the treatment with you at the outpatient clinic. Your treatment wishes play an important role in this. 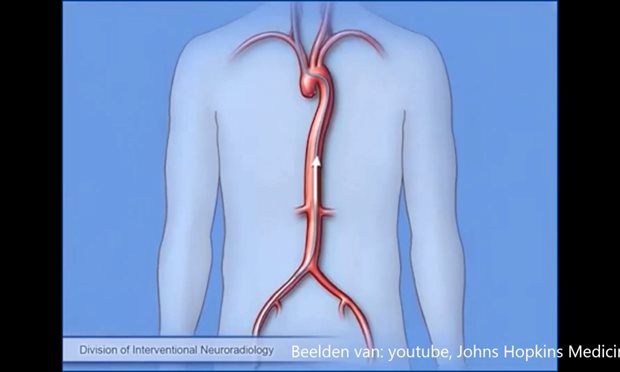 An aneurysm is any bulge in the wall of a brain artery. The aneurysm is almost always at the junction of two arteries. It is usually at the bottom of the brain or brain stem. read more

The risk of an aneurysm is that it can rupture and bleed.
It is not exactly known why one person develops an aneurysm and another does not. We know that it has to do with the wear and tear of the blood vessels and that people with high blood pressure and people who smoke are at greater risk. An aneurysm is not hereditary. However, there are families in which an aneurysm is more common. There are a few rare hereditary diseases that more often cause an aneurysm of the brain.
You can compare an aneurysm to a bicycle tire with a hole in the tire and the inner tube bulging outwards. The aneurysm can rupture and cause a brain hemorrhage (subarachnoid hemorrhage). 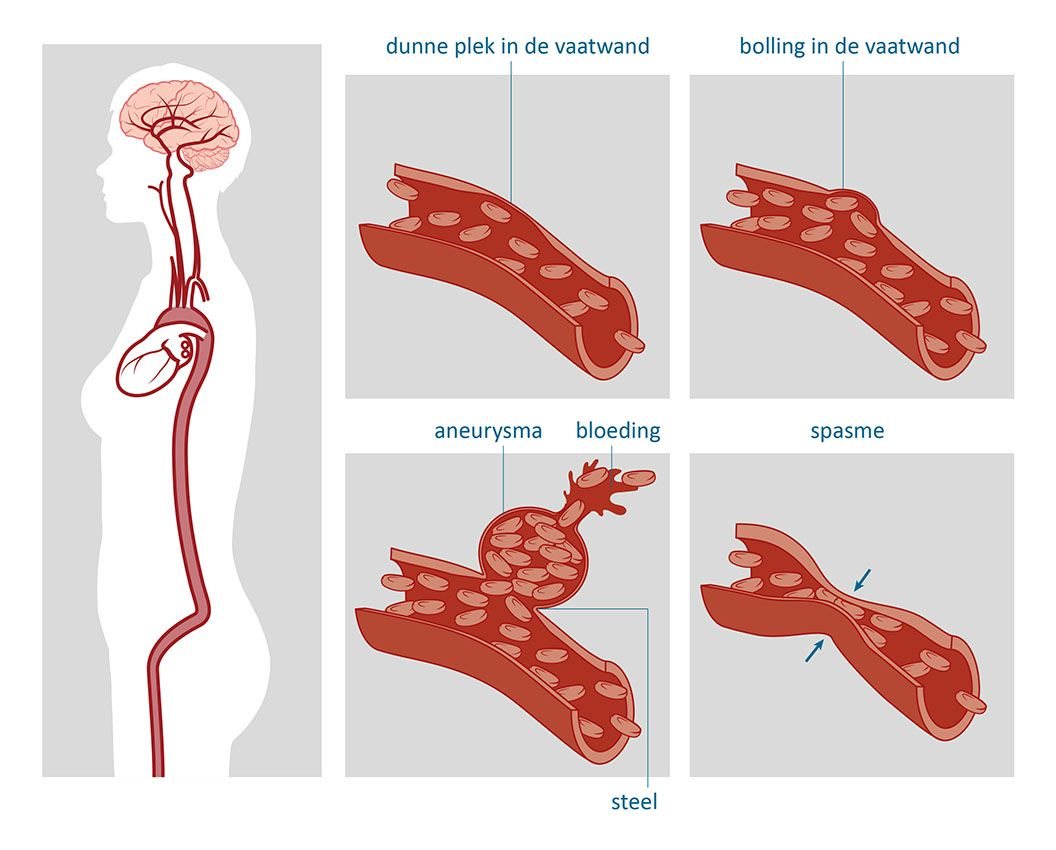 How common is a brain aneurysm?

How does a brain aneurysm arise?

At the moment of the bleeding, head and/or neck pain suddenly occurs. Usually this goes hand in hand with nausea and vomiting. You may fall unconscious. Sometimes there are epileptic spasms in arms and legs or symptoms of paralysis.

In many cases, a brain aneurysm is discovered by accident, for example when investigating another symptom or disorder.

There are also brain aneurysms that cause neurological dysfunctions because they are continuing to grow larger. That is because it presses against the brain, brain stem, or cranial nerves.
Symptoms arise depending on the area or the nerve that gets pressed into.

If it turns out that you have a brain aneurysm, you will be referred to the neurologist or neurosurgeon specializing in cerebral arteries. The doctor makes an assessment of the risk of the aneurysm hemorrhaging and weighs this against the treatment risk. read more

After a brain aneurysm, there are a number of things to consider. read more